Richard Rohr, James Martin, and the Great Reset
The Universal Christ and the Anti-Christ

The Great Reset cannot be a "success" without appealing to human spiritual hunger. Richard Rohr's theology checks all the boxes. He is one of the world's most popular spiritual writers/speakers, with his affable presentation and his promise of an "essential, connected, true self". He offers inclusiveness that "transcends" dualistic world religions, mysticism, and ambiguity. He is embraced by cardinals at the highest levels of the Vatican and prominent Evangelicals, and is supported by secular society (Melinda Gates, Oprah, NY Times, etc.). Richard Rohr's health is in decline and he has handed the baton to Fr. James Martin, who has become the leading Catholic "champion" of the spiritual universalism that will underpin the Great Reset.

Like many serious Christians, we had never thought much about Richard Rohr. We moved to the country and attended a small parish, where the priest was passionate, pastoral, and dynamic. We thought we hit a gold mine. But we began to notice weird ideas in the homolies, which reminded me of my years in the New Age. The priest said he'd been reading Richard Rohr for 20 years, so we set out to understand Richard Rohr. We were astonished to discover what we believe will be the spiritual universalism that will underpin "The Great Reset". This is Part 5 of this series, where we explore the very concerning origins of these propositions. 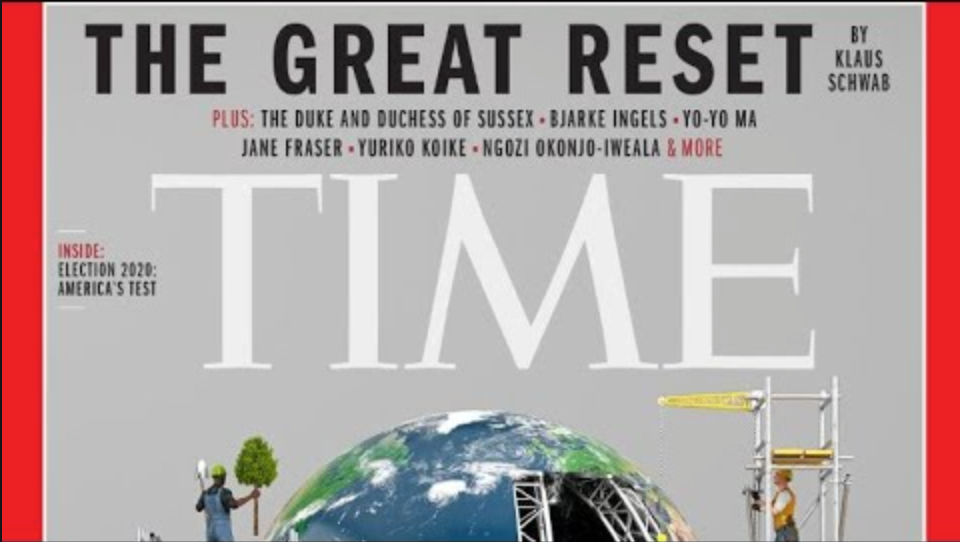 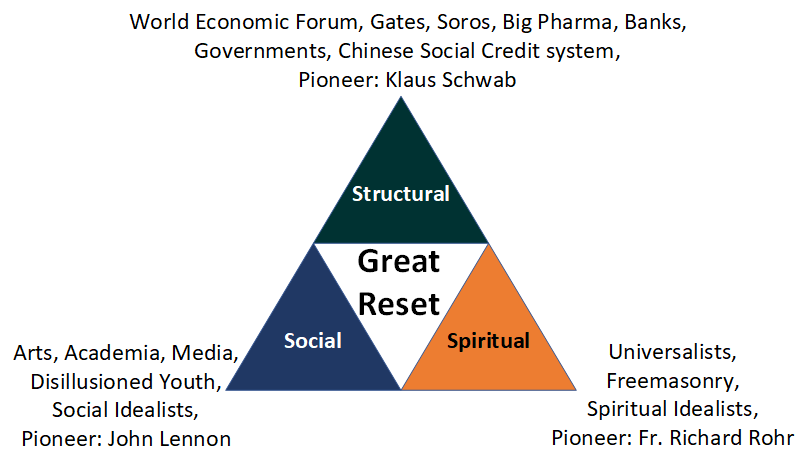 There is a continuum between idealism and cynicism (conspiracy theory)

It's unhealthy to camp out at either extreme

Jesus said, "be as wise as serpents and as gentle as doves" (Mat 10:16). This is the proper balance.

Richard Rohr's theology is attractive to those on the idealist end of the spectrum. Idealists trust that everything would be fine if everyone would follow health mandates, recycle, drive electric cars, give to the poor, be spiritual, inclusive, and diverse. They deny the authority of the Bible and Church doctrine, and deny the existence of malevolent spiritual entities (Eph. 2:2).

His [Jesus'] other words for that [evil] were "powers, prinicpalities, thrones and dominions". Those are pre-modern words for "institutions and corporations". (Richard Rohr source)

It would be great if there was no devil. Unfortunately, a bad neighbourhood at night is dangerous whether or not the person whistling in the dark believes it. We have a separate article on The Great Reset and the Apocalypse.

Richard Rohr hollows out the central message of Jesus as Redeemer and Saviour (Mk 1:15, Jn 14:6) and neuters the mission of the Church. His vision for the Church (and all religion) is to enlighten humans to the Universal Christ energy ... And then get out of the way! The diagram below depicts Richard Rohr's world view.

For Richard Rohr, there was no Jesus before the day he was conceived, and more importantly, Jesus' role after his death is not the Saviour to whom we worship and surrender, but rather as an example of how to live the message of the Universal Christ energy.

I believe that Jesus’ death on the cross is ... not some bloody payment required by God’s offended justice to rectify the problem of sin. Such a story line is way too small and problem-oriented. (Richard Rohr, source)

Notice the coarse representation of the Christian view, then shaming people who believe it as "small". Richard Rohr has never faced a serious scholar in an open debate. His interviews, talks, and writings have common patterns of spurious references, rattling off credentials, shaming opponents, straw men, gish gallops, etc. which obscure his true teachings and give them an appearance of legitimacy. Below is an example.

This Jesus is ‘the stone that was rejected by you, the builders; it has become the cornerstone.’  There is salvation in no one else, for there is no other name under heaven given among mortals by which we must be saved.

Richard Rohr and the Great Reset

Richard Rohr's message is substantially identical to what transmediums have been channeling about the Universal Cosmic Christ for about 100 years in preparation for the great apostasy, the persecution of Christians and a unified anti-church. We propose that these channeled entities are fallen angels. When we strip away the hand waving, Rohr denies Jesus' simple message:

In a very practical way, Richard Rohr teaches an anti-Gospel.

John Lennon was an idealist. Richard Rohr has the same vision, except spiritualized. With Rohr's Universal Christ consciousness we can create a world where there is:

no hell below us, no countries, nothing to kill or die for, no religion, no possessions, no greed or hunger, a brotherhood of man, people sharing all the world.

The Great Reset adopts this vision with an totalitarian twist.

Patterns of loss of faith by those who follow Richard Rohr

There is a phenomenon around Christians who lose their faith after reading Richard Rohr. For example, the popular Christian singer Audrey Assad started reading Rohr because "we shouldn't be afraid of new ideas". She was attracted to his language of "inclusion", condemnation of "privilege", and endorsement of eastern mysticism. She eventually gave up Christianity completely. (source) This phenomenon is happening in Evangelical circles also (source), including Kevin Max, who was a lead singer for the popular Christian rock band, DC Talk. (source).

Where does the Universal Christ come from if not the Bible or Catholic doctrine?

Below is the Fr. Rohr's concept of the Universal Christ followed by corresponding concepts in eastern religions and channeled messages from the New Age.

The connection between Richard Rohr's teachings and the Luciferians

Here is the connection between Richard Rohr and the lucifarians.

Helena Petrovna Blavatsky (1831–1891) was an occultist and honorary Freemason who co-founded Theosophy. She is the source of the Ascended Masters teaching. Ms. Blavatsky founded Lucifer Magazine and is credited by historians to be the mother of the New Age movement. Blavatsky would try to unify religious systems, blending Gnosticism and western esotericism with eastern mysticism and Egyptian mystery schools. She published 800 articles in the theosophical magazine called Lucifer.

She taught that satan, Lucifer in the story of Genesis, liberated man from the confines and constructs Jehovah imposed on them. She claims Jehovah was evil for trapping and containing mankind and these systems of thought that prohibited freedom of thinking and freedom of the will. Blavatsky claims that Lucifer came and illuminated them and freed them from that bondage and enlightened them and in one sense continues to do that every time we actualize self-sovereignty in our thinking.

Compare the words of these Ascended Masters to those of Richard Rohr, who says "This stuff just comes to me". Richard Rohr says the Church uses "sin management" to control people. He denies there is such thing as sin.

We have a separate article on Helena Blavatsky and the lucifarians.

The Bible predicted this

... do not believe every spirit, but test the spirits to see whether they are from God, because many false prophets have gone out into the world. 2 This is how you can recognize the Spirit of God: Every spirit that acknowledges that Jesus Christ has come in the flesh is from God, 3 but every spirit that does not acknowledge Jesus is not from God. This is the spirit of the antichrist, which you have heard is coming ... (1 Jn 4:1-3)

3 But I am afraid that as the serpent deceived Eve by its cunning, your thoughts will be led astray from a sincere and pure devotion to Christ.  4 For if someone comes and proclaims another Jesus than the one we proclaimed, or if you receive a different spirit from the one you received, or a different gospel... such boasters are false apostles, deceitful workers, disguising themselves as apostles of Christ.  14 .... Even Satan disguises himself as an angel of light.  15 So it is not strange if his ministers also disguise themselves as ministers of righteousness. (2 Cor 11:3-15)

In the last time there will be scoffers, indulging their own ungodly lusts.”19 It is these worldly people, devoid of the Spirit, who are causing divisions. (Jude 1:17)

Some of the quotes and ideas in this article can be found in the YouTube video Ex New Age Guru debunks the Universal Christ.