Marian Apparitions - aren't they a Hoax?

What irks some Evangelicals is that the Church has accepted some Marian apparitions as authentic revelation and even a confirmation of the Church's beliefs about Mary. Evangelicals do not accept apparitions. They think they are hoaxes or worse still, works of the devil.

The Church does not require the faithful to believe that Mary has been appearing. Every Marian appearance that has been approved by the Church is considered "private revelation" which means that it is not required that the faithful accept it. Anyone is welcome to choose to ignore them or use them as a source of inspiration. Article 66-67 of the Catechism says:

... Yet even if Revelation is already complete, it has not been made completely explicit; it remains for Christian faith gradually to grasp its full significance over the course of the centuries...Throughout the ages, there have been so-called "private" revelations, some of which have been recognized by the authority of the Church. They do not belong, however, to the deposit of faith. It is not their role to improve or complete Christ's definitive Revelation, but to help live more fully by it in a certain period of history...Christian faith cannot accept "revelations" that claim to surpass or correct the Revelation of which Christ is the fulfillment...

Those who think Apparitions are invalid, are free to do so, there is no requirement by the Church to accept them. However, we suggest investigating them before trying to dismiss them. The miracles surrounding these events are difficult to ignore, for anyone who does any serious investigation into these events.

There were accurate predictions of future world events made by children who claim to have seen Mary at Fatima, there were many physical healings at Lourdes, there were 9 million conversions to Christianity in Guadeloupe. At all of these apparitions, Mary has encouraged people to enter into a personal relationship with Jesus. She has adamantly instructed people to read the Bible every day.

In my article Mary in the Bible, we have a full discussion on why Catholics think Mary is the New Ark of the Covenant. We think the Biblical evidence is overwhelming.

If you want to understand how Catholics treat Mary, look at the way the Israelites treated the Ark of the Covenant.

I (Hugh) was in Israel last year and stayed with an Orthodox Jewish family. You should hear the way they talk about the Ark of the Covenant. They sound just like Catholics talking about Mary. They are still looking all over Israel for the Ark. However, as Catholics, we think it has been found. The Book of Revelation 11:19 presents Mary as the New Ark of the Covenant.

If Mary is the New Ark of the Covenant, then it makes sense that God would want his Ark to be seen. Marian apparitions may be an example of God allowing the Ark of the covenant to be seen by the people of New Israel, which is the Church, just as when it was returned to Israel. The enthusiasm at Lourdes and Fatima is not much different from Israel's celebrations when the Ark of the Covenant was returned to Jerusalem. (2 Sam 6:14)

The Church is slow to approve apparitions

The Catholic Church is very slow to approve any apparitions and has approved very few because of the rigorous investigation process. There have been only about 40-Church approved apparitions in 2000 years. One way to validate a spiritual miracle is to look at its fruits. Mathew says, "You will know them by their fruits." (Mt 7:16)

In Mexico City in 1531, one reported appearance of Mary converted 9 million Aztecs (to put that in perspective, a huge Billy Graham mission might result in several thousand conversions). The Aztecs sacrificed live babies on altars to their gods. After the reported appearance of Mary, they turned their lives over to Christ and stopped their barbaric practices. Most apparitions have been followed by numerous and apparently miraculous healings. The Church believes that these healings occur through the power of Christ as a result of Mary's prayers, much the way some Evangelical pastors have performed miraculous healings in the name of Jesus.

Marian apparitions cause worship of Jesus

Some Evangelicals claim that the apparitions at Fatima were all about Mary worship. But the three children (8, 9 and 10 years old) who were visited said Mary gave them this prayer to add to the Rosary.

"O my Jesus, forgive us of our sins. Save us from the fires of hell. Lead all souls into heaven, especially those in most need of thy mercy."

We think any Evangelical would approve of this prayer. It does not infer that she is equal with God.

The prayer was inserted as part of the Rosary by the Church and has been used by Catholics around the world for the last 80 years. Saint Paul says, "No one can say Jesus is Lord, except by the Holy Spirit." (1 Col 12:3) The children at Fatima said Mary was proclaiming that Jesus was Lord. 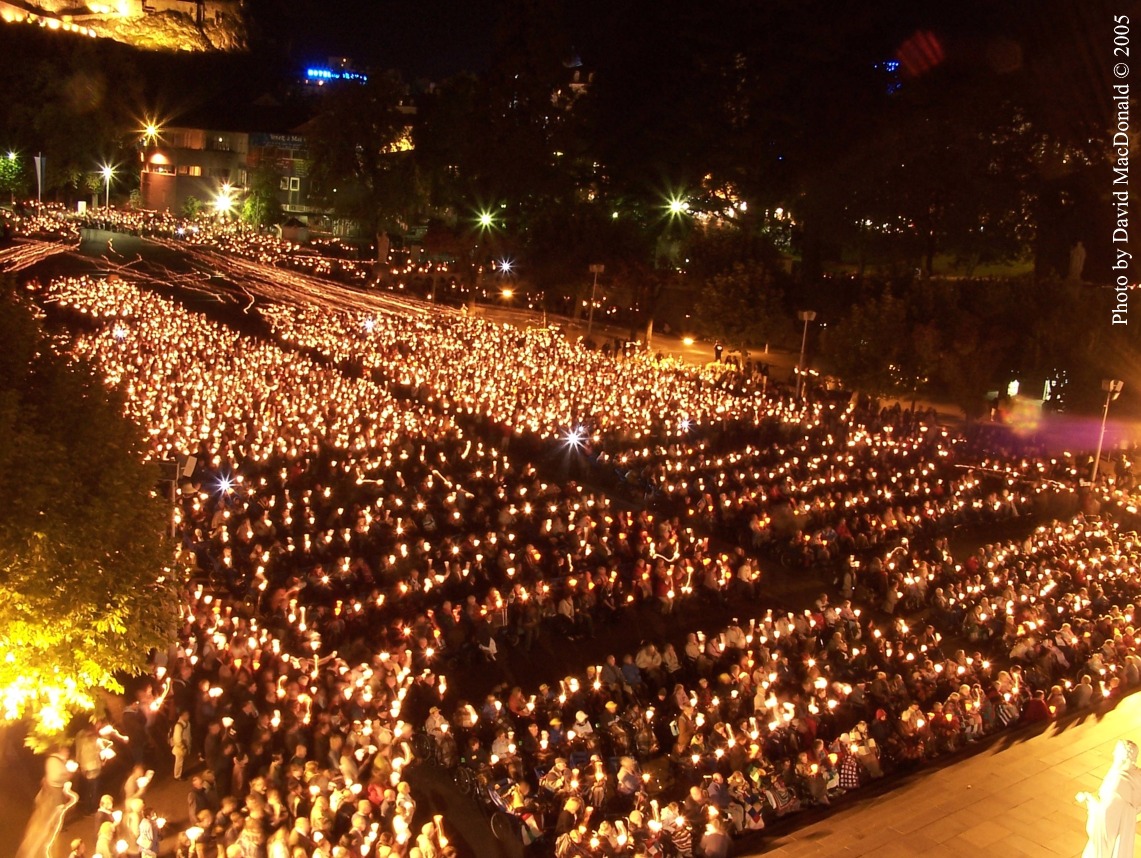 I (Hugh) took this photo at Lourdes, France, where it is reported that Mary appeared to Bernadette in 1858. Thousands gather every night.

My mother constantly told people about my successes. Catholics believe Mary is like that. She wants everyone to know about her Son's conquest of death. That's what mothers do, talk up their children. It is characteristic of most approved apparitions that Mary talks up the necessity of a personal relationship to Jesus and the necessity to study Scripture.

During the appearance at Fatima, July 13, 1917, the young children heard Mary say "Russia...will spread her errors throughout the whole world, promoting wars and persecutions of the Church; the good will be martyred...various nations will be annihilated." Mary asked for the world to pray for Russia. On November 13, 1917, four months later, Russia fell to communism.  These young children also relayed Mary's prediction about the fall of Russian communism which came to pass in the early 1990's.  We find it interesting that over 70 years later Pope John Paul II was instrumental in the demise of Communism.

Healing at the sites of apparitions

The first time I (Hugh) went to Lourdes was in 2005. I cried like a baby and felt an incredible healing in my spirit.

In 2012 we both went for three days as part of a pilgrimmage throughout France. As the timing for our visit was a week after the flooding, there weren't many pilgrims. So upon arriving, we went to the grotto, walked along the inside of it and saw the spring (Our Lady told Bernadette to dig in the mud to find the spring). When we sat down on the chairs in front of the grotto to pray to Jesus, I (Diane) began to quietly weep and weep... and weep. For about 20 minutes a gentle healing presence washed over me. Jesus did more gentle "surgery", due to the hidden presence of His mother, whose soul magnifies the Lord. (Lk. 1:46)

The Evangelical healing minister Benny Hinn endorsed the divine healing power of the Marian shrines at Lourdes and Fatima on national TV. He told Larry King and the viewing audience:

“Look, God has given us, Larry, many sources of healing. Look at Lourdes. People have been healed going to Lourdes and Fatima. There was a pool, even in the Bible, the pool of Bethesda, where the angels stirred the water — people were also healed. So God has given us many avenues of healing. He wants us to be healed.”

A personal note about Mary

No woman is like you. You are more than Eve or Sarah, blessed above all nobility, wisdom, and sanctity.
(Martin Luther Sermon - Feast of the Visitation, 1537)