Did the Pope apologize to the Muslims for quoting a guy who said Mohammed did "evil and inhuman things?"

A young Evangelical friend of mine said:

First let's look at the "offensive" comments that the Pope made. He quoted a 14th century Byzantine Emperor, who was later killed by Muslim attack.

"Show me just what Mohammed brought that was new, and there you will find things only evil and inhuman, such as his command to spread by the sword the faith he preached."

Of course there was a major crisis afterwards. And the Pope clarified himself on four different occations (full text below). However, most people in the press and in the Muslim community agree that the Pope did not actually apologize. He did not say the words that he quoted were not true. He simply said they did not reflect his personal opinion.

...when in Munich I emphasized how important it is to respect what is sacred to others - that my deep respect for the great religions, and especially for Muslims, who "worship God, who is one" and with whom we are engaged in preserving and promoting together, for the benefit of all men, "peace, liberty, social justice and moral values" (Nostra Aetate, n. 3), appeared quite clear .. (Wed. September, 20th, 2006)

Yes, Catholics actually believe that most Muslims are worshipping the same God, although a much compromised understanding of this God. We believed that even when they were invading and killing us.

Most Evangelicals on the other hand, think that Muslims are not worshipping the same God.

Columnist Tim Perry, a professor at Providence College and Theological Seminary in Otterburne, Man., triggered a deluge of angry mail after he suggested that Muslims and Christians ...indeed worship the same God:

One reader wrote: "Muslims are worshipping a god who doesn't exist except in the mind of Mohammed and those who follow his teachings"

In a telephone interview from Los Angeles, Hussain, who's 40, had a question for evangelicals: "Are you saying that Christians and Jews don't worship the same God? Because Jews don't believe that Jesus was God who came to Earth ... are (Jews) now worshipping a different God?

Perry's response: "I'm not saying Christians and Muslims have the same understanding of God. But It's the same God that's being worshipped." (Toronto Star, Sept 30, 2006)

I have a full article about whether Muslims worship the same God here. 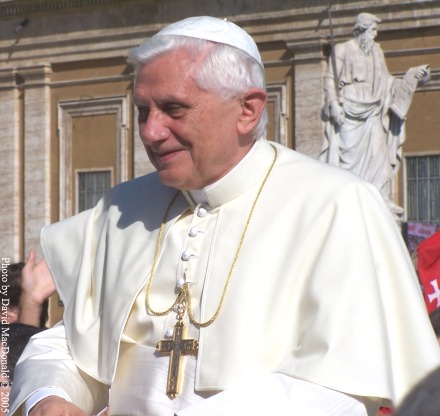 The following is the text of Pope Benedict XVI's remarks regretting causing offence to Muslims in his 12 September speech in the Bavarian city of Regensburg.

The pastoral visit which I recently made to Bavaria was a deep spiritual experience, bringing together personal memories linked to places well known to me and pastoral initiatives towards an effective proclamation of the Gospel for today.

I thank God for the interior joy which he made possible, and I am also grateful to all those who worked hard for the success of this Pastoral Visit.

As is the custom, I will speak more of this during next Wednesday's general audience.

At this time, I wish also to add that I am deeply sorry for the reactions in some countries to a few passages of my address at the University of Regensburg, which were considered offensive to the sensibility of Muslims.

These in fact were a quotation from a medieval text, which do not in any way express my personal thought.

Yesterday, the Cardinal Secretary of State published a statement in this regard in which he explained the true meaning of my words.

I hope that this serves to appease hearts and to clarify the true meaning of my address, which in its totality was and is an invitation to frank and sincere dialogue, with great mutual respect.

Today, I would like to think back to the various moments of the Pastoral Visit that the Lord granted me to make last week to Bavaria ...The next day, Tuesday, in Regensburg, a Diocese established by St Boniface in 739 ...On that day it was a particularly beautiful experience for me to deliver a conference to a large audience of teachers and students at the University of Regensburg, where I taught as professor for many years.

With joy, I was able to meet once again the university world that was my spiritual homeland for a long period of my life. As a theme I had chosen the issue of the relationship between faith and reason.

To introduce my audience to the drama and timeliness of the topic, I cited some words from a 14th-century Christian-Islamic dialogue, with which the Christian interlocutor, the Byzantine Emperor Manuel II Paleologus - in an incomprehensibly brusque way for us - presented to his Islamic interlocutor the problem of relations between religion and violence.

This citation, unfortunately, lent itself to misinterpretation. For the attentive reader of my text, however, it is clear that in no way did I want to make my own the negative words spoken by the Medieval Emperor in this dialogue, and that their polemical content does not express my personal conviction. My intention was quite different:  starting with what Manuel II subsequently said in a positive manner, with very beautiful words, about rationality that must guide us in the transmission of faith, I wanted to explain that it is not religion and violence but rather religion and reason that go together.

The topic of my lecture - responding to the mission of the University - was therefore the relationship between faith and reason: I wished to invite [people] to the dialogue of the Christian faith with the modern world and to the dialogue of all the cultures and religions.

I hope that in the various circumstances during my Visit - for example, when in Munich I emphasized how important it is to respect what is sacred to others - that my deep respect for the great religions, and especially for Muslims, who "worship God, who is one" and with whom we are engaged in preserving and promoting together, for the benefit of all men, "peace, liberty, social justice and moral values" (Nostra Aetate, n. 3), appeared quite clear.

Therefore, I trust that after the immediate reactions, my words at the University of Regensburg will serve as an incentive and an encouragement for a positive, even self-critical dialogue, both between religions and between modern reason and the Christian faith.

I am pleased to welcome you to this gathering that I wanted to arrange in order to strengthen the bonds of friendship and solidarity between the Holy See and Muslim communities throughout the world. I thank Cardinal Poupard, President of the Pontifical Council for Inter-Religious Dialogue, for the words that he has just addressed to me, and I thank all of you for responding to my invitation.

The circumstances which have given rise to our gathering are well known. I have already had occasion to dwell upon them in the course of the past week. In this particular context, I should like to reiterate today all the esteem and the profound respect that I have for Muslim believers, calling to mind the words of the Second Vatican Council which for the Catholic Church are the Magna Carta of Muslim-Christian dialogue: "The Church looks upon Muslims with respect. They worship the one God living and subsistent, merciful and almighty, Creator of heaven and earth, who has spoken to humanity and to whose decrees, even the hidden ones, they seek to submit themselves whole-heartedly, just as Abraham, to whom the Islamic faith readily relates itself, submitted to God" (Declaration Nostra Aetate, 3). Placing myself firmly within this perspective, I have had occasion, since the very beginning of my pontificate, to express my wish to continue establishing bridges of friendship with the adherents of all religions, showing particular appreciation for the growth of dialogue between Muslims and Christians (cf. Address to the Delegates of Other Churches and Ecclesial Communities and of Other Religious Traditions, 25 April 2005). As I underlined at Cologne last year, "Inter-religious and inter-cultural dialogue between Christians and Muslims cannot be reduced to an optional extra. It is, in fact, a vital necessity, on which in large measure our future depends" (Meeting with Representatives of Some Muslim Communities, Cologne, 20 August 2005). In a world marked by relativism and too often excluding the transcendence and universality of reason, we are in great need of an authentic dialogue between religions and between cultures, capable of assisting us, in a spirit of fruitful co-operation, to overcome all the tensions together. Continuing, then, the work undertaken by my predecessor, Pope John Paul II, I sincerely pray that the relations of trust which have developed between Christians and Muslims over several years, will not only continue, but will develop further in a spirit of sincere and respectful dialogue, based on ever more authentic reciprocal knowledge which, with joy, recognizes the religious values that we have in common and, with loyalty, respects the differences.

Inter-religious and inter-cultural dialogue is a necessity for building together this world of peace and fraternity ardently desired by all people of good will. In this area, our contemporaries expect from us an eloquent witness to show all people the value of the religious dimension of life. Likewise, faithful to the teachings of their own religious traditions, Christians and Muslims must learn to work together, as indeed they already do in many common undertakings, in order to guard against all forms of intolerance and to oppose all manifestations of violence; as for us, religious authorities and political leaders, we must guide and encourage them in this direction. Indeed, "although considerable dissensions and enmities between Christians and Muslims may have arisen in the course of the centuries, the Council urges all parties that, forgetting past things, they train themselves towards sincere mutual understanding and together maintain and promote social justice and moral values as well as peace and freedom for all people" (Declaration, Nostra Aetate, 3). The lessons of the past must therefore help us to seek paths of reconciliation, in order to live with respect for the identity and freedom of each individual, with a view to fruitful co-operation in the service of all humanity. As Pope John Paul II said in his memorable speech to young people at Casablanca in Morocco, "Respect and dialogue require reciprocity in all spheres, especially in that which concerns basic freedoms, more particularly religious freedom. They favour peace and agreement between peoples" (no. 5).

Dear friends, I am profoundly convinced that in the current world situation it is imperative that Christians and Muslims engage with one another in order to address the numerous challenges that present themselves to humanity, especially those concerning the defence and promotion of the dignity of the human person and of the rights ensuing from that dignity. When threats mount up against people and against peace, by recognizing the central character of the human person and by working with perseverance to see that human life is always respected, Christians and Muslims manifest their obedience to the Creator, who wishes all people to live in the dignity that he has bestowed upon them.

Dear friends, I pray with my whole heart that the merciful God will guide our steps along the paths of an ever more authentic mutual understanding. At this time when for Muslims the spiritual journey of the month of Ramadan is beginning, I address to all of them my cordial good wishes, praying that the Almighty may grant them serene and peaceful lives. May the God of peace fill you with the abundance of his Blessings, together with the communities that you represent!