Do Catholics and Muslims who Worship the same God?

Pope Benedict's comments in Germany make clear that the Catholic Church is not in bed with Islam. Our 1400 year history with the Muslims has not been love and roses. Muslims have spilled more Catholic blood than any other nation or people. We got an email that said:

Line 841 of the Catholic catechism ... seems to contradict Jesus himself. It states that the plan of salvation includes the Moslems, because they worship the same God as the Jews and Christians. ...I live near a Mosque - every one of them has a crescent moon on top. ...Over the centuries, the Moslem cult has ascribed the virtues of the one true God on their moon God, claiming that our God was the moon god all along. ...The God of the Moslems is the Babylonian moon god. The God of Abraham is NOT the Babylonian moon god. ...Jesus himself said that he is the way, the truth, and the life, that nobody comes to the Father except through him. He also said that anybody attempting to come to the Father another way is like a thief or a robber. Surely - this line is not saying that the Moslems are saved? That would be an abomination! Neither the Moslems nor the Jews could be saved solely by belief in the God of Abraham. They must come to a saving knowledge of Jesus Christ - or be forever separated from God.

The first question is "what is the plan of salvation?" We believe it is that all peoples would come to know God through our Lord and Saviour Jesus Christ. (Mat 28:19) Therefore all people are part of God's plan for salvation. They are to be evangelized in the name of Jesus. There is nothing biblically incorrect about the Catechism saying we should carry that message of salvation to Muslims and include them in that plan of salvation.

Martin and Gracia Burnham were Evangelical Christian missionaries who were captured by Islam terrorists in Indonesia and held for over a year. The wife, Gracia Burnham was rescued by Indonesian police after a year. She had a gunshot wound and her husband was killed in the crossfire of the battle. The following is an excerpt that helps get inside the Muslim mind. 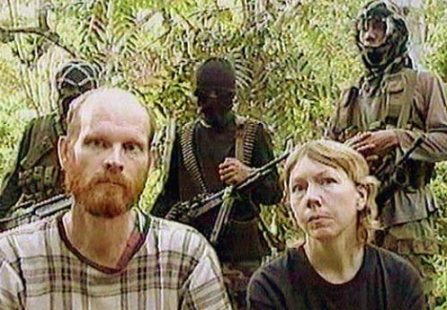 Interviewer: Did you learn anything about ministering to Muslims that might be helpful to others?

Answer by Gracia Burnham GB: My only expertise is from living with these guys for a year and observing them. The first question Martin and I had when we first were taken was, "were we worshipping the same God these guys were worshipping?" And we started making notes of the characteristics of Allah:

... and we came to believe that we were talking about the same God we Christians worship, Jehovah. Then one day they were talking about the names of God that show his different characteristics. He's merciful, and all these different things. I asked if one of the names for their God was love. Does Allah love you? And you could see him thinking and he said, "No, Allah doesn't love us and we're not asked to love Allah. We just worship him because he's the true creator." So I told Martin, with a god who doesn't love you, this is where that religion leads, to something like this. If I started teaching Muslims, I would teach the characteristics of God, the ones they already know and then say, "Here's one you haven't been taught: God is love." They've just been deceived in their concepts of God.

Interviewer: It's interesting that they would know John 3:16 without the concept of love coming into it.

GB: One of them, Solaiman, would say to me, Islam is a religion of justice and we're going to get justice for everything bad that has happened to Muslims and he would go back to the Crusades and on up. And we told him that Christianity is a religion of mercy. We know that we've sinned. And that's another thing about Muslims. Their concept of sin is like ours. God won't tolerate it. They know that everyone has sinned. I remember saying to him one day, "We need somebody to show us mercy because we've sinned ... Jesus paid for our sins so they're removed and we don't have to bear that debt anymore and we're not going to be judged by our sinfulness." Solaiman got this sneer on his face and said, "Where's the justice in that? I'm going to pay for my own sins." And we were so sad when we went to bed that night and Martin said, "That's exactly what's going to happen. Solaiman's going to pay for his own sins and it won't be a pretty sight."

They think Abraham is their father, and they believe that the lineage of God came down to them through the son of Hagar (Abraham's concubine), Ishmael. Although this is a perversion of the lineage of God's people (who came through Isaac), Catholics and many Evangelicals don't think this is a different God. Here is an excerpt of a Muslim apologetic on the Crescent moon:

Why the heck is the Catholic Church saying "together with us" about the Muslims ?

The Church finds it a profound responsibility to evangelize the Muslims. It realizes it cannot evangelize by war. It must make peace with Muslims to the extent possible. It must reach across social and cultural barriers. The Church finds no evidence that they are worshiping a different God. After the Jews, the Muslims have the closest relationship to Christian beliefs of any other religion. It is useful to leverage this commonality during the evangelization process. To deny that would put us at a supreme disadvantage because Muslims would see our ignorance.

We must win them by love

In order to understand Catechism Verse 841 of the Catechism we must look at its context. This verse follows a long discussion in the Catechism about the Church's relationship to all people of the world.

Verses 836-833 speak about Christians who are the Body of Christ. This includes Catholics, Evangelicals, Orthodox Christians and all who profess that "Jesus is Lord."

Verses 839 -845 clearly is under a new heading describing the Church's relationship to Non Christians, who are not in the body of Christ. In these verses there is a hierarchy of people outside the body of Christ

If the Catholic Church believed Muslims were worshipping a different God then the Muslims would be included in verse 844 of the Catechism [category (3)] above. But there is no evidence that they worship a different God. That is why Catholics can say "together with us" in Verse 841 of the Catechism. The Church has never condoned worship of foreign gods and the martyrs throughout history (including the first centuries) died to protect against this. Six verses after the discussion of Muslims, the Catechism concludes this section and makes it clear that those who refuse Jesus will perish (846).

Does the Catholic Church think that non Christians can get into heaven?

The Catechism makes it clear "...they could not be saved who, knowing that the Catholic Church was founded as necessary by God through Christ, would refuse either to enter it or to remain in it." (Cat 846) This is only 5 paragraphs past the discussion of the need to pray for Muslims. Does that mean only card carrying Christians will will enter Heaven? We have an in depth in the article "Are non-Christians saved?".