Why do Catholics portray Jesus on a cross, isn't He risen?

Some of my Evangelical friends think the only value of a crucifix is to ward off vampires. I find it interesting that mythology would intuitively know the significance of that symbol.

Yes, Jesus is risen and Catholics honour and pray to the risen Christ. He also died on a cross. On that cross He redeemed us and suffered for us. Catholics feel this is extremely important. Catholics have no problem kneeling before the crucified Christ on the cross (Crucifix). It is there that He saved us. 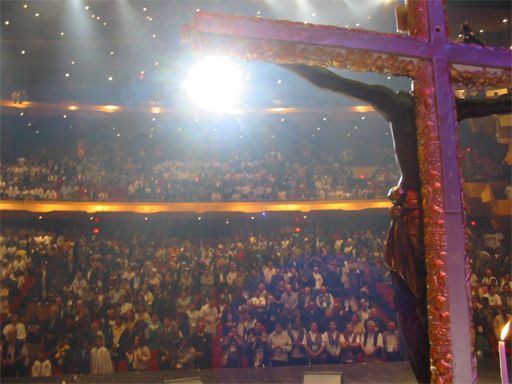 Most Evangelicals loved the movie "The Passion." It is based on the book "The Dolorous Passion of our Lord Jesus Christ" by the Anne Catherine Emmerich. She was a nun who lived from 1774-1824. (Download the book here). There is power in a personal encounter with Christ on the cross. Jesus conquered our sin on that cross. "Thank you Jesus for dying for us. Thank you Jesus for saving us." An Evangelical friend of mine said:

Why do Catholics worship a cross? The cross was an awful instrument of torture. It is not something to be revered. You are making it an idol!

The first problem with that statement is that Catholics are not worshipping the cross, they are worshipping Jesus on the cross. Yes, the cross was an instrument of torture, but when united to the body of Christ it takes on a distinctly Christian connotation. The cross gains its significance by Jesus' presence on it. If anything would make the cross an idol, it would be removing Jesus from the cross.

Personally I (Hugh) have no problem with a cross with or without Jesus on it. I always love it and I loved that scene in the "Passion" where Christ embraced the cross, and the other prisoner said, "look He embraces the cross." That is true, no one ever embraced a cross before Jesus, but since that fateful day many millions of faithful Christians have embraced the cross of Jesus.

Evangelicals also portray the crucified Christ in art. However, the art I am speaking about is music. How many great Evangelical songs vividly portray him on the cross, such as Chris Tomlin's "At the Cross".

That is great. Catholics use visual art to honour Jesus on the cross and Evangelicals use audio art (music) to portray this most important event. Praise the Lord Jesus. 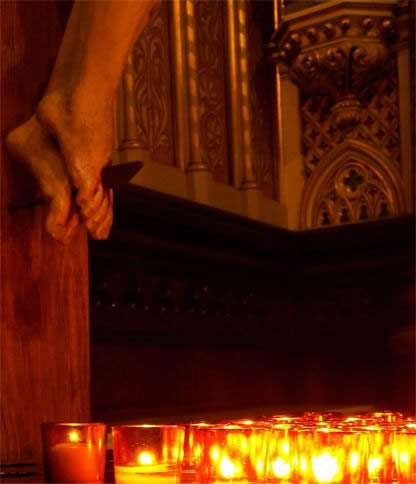 I took this photo in Ottawa, Canada

What does the Bible say about the Cross?

Through the Law I am dead to the Law, so that now I can live for God. I have been crucified with Christ, and I live now not with my own life but with the life of Christ who lives in me. The life I now live in this body I live in faith: faith in the Son of God who loved me and who sacrificed himself for my sake. I cannot bring myself to give up God’s gift: if the Law can justify us, there is no point in the death of Christ.’

Are you people in Galatia mad? Has someone put a spell on you, in spite of the plain explanation you have had of the crucifixion of Jesus Christ? Let me ask you one question: was it because you practised the Law that you received the Spirit, or because you believed what was preached to you? Are you foolish enough to end in outward observances what you began in the Spirit? Have all the favours you received been wasted? And if this were so, they would most certainly have been wasted. Does God give you the Spirit so freely and work miracles among you because you practice Law, or because you believed what was preached to you?

Take Abraham for example: he put his faith in God, and this faith was considered as justifying him. Don’t you see that it is those who rely on faith who are the sons of Abraham? Christ redeemed us from the curse of the Law by being cursed for our sake, since scripture says: Cursed be everyone who is hanged on a tree. This was done so that in Christ Jesus the blessing of Abraham might include the pagans, and so that through faith we might receive the promised Spirit.

As for me, the only thing I can boast about is the cross of our Lord Jesus Christ, through whom the world is crucified to me, and I to the world. It does not matter if a person is circumcised or not; what matters is for him to become an altogether new creature. Peace and mercy to all who follow this rule, who form the Israel of God.

The Early Church's position on the Cross

A discourse of St Andrew of Crete - The cross is Christ's glory and triumph (about 750 A.D.)

We are celebrating the feast of the cross which drove away darkness and brought in the light. As we keep this feast, we are lifted up with the crucified Christ, leaving behind us earth and sin so that we may gain the things above. So great and outstanding a possession is the cross that he who wins it has won a treasure. Rightly could I call this treasure the fairest of all fair things and the costliest, in fact as well as in name, for on it and through it and for its sake the riches of salvation that had been lost were restored to us.

Therefore, the cross is something wonderfully great and honourable. It is great because through the cross the many noble acts of Christ found their consummation – very many indeed, for both his miracles and his sufferings were fully rewarded with victory. The cross is honourable because it is both the sign of God’s suffering and the trophy of his victory. It stands for his suffering because on it he freely suffered unto death. But it is also his trophy because it was the means by which the devil was wounded and death conquered; the barred gates of hell were smashed, and the cross became the one common salvation of the whole world.

The cross is called Christ’s glory; it is saluted as his triumph. We recognise it as the cup he longed to drink and the climax of the sufferings he endured for our sake. As to the cross being Christ’s glory, listen to his words: Now is the Son of Man glorified, and in him God is glorified, and God will glorify him at once. And again: Father, glorify me with the glory I had with you before the world came to be. And once more: “Father, glorify your name.” Then a voice came from heaven: “I have glorified it and will glorify it again.” Here he speaks of the glory that would accrue to him through the cross. And if you would understand that the cross is Christ’s triumph, hear what he himself also said: When I am lifted up, then I will draw all men to myself. Now you can see that the cross is Christ’s glory and triumph.