For those Evangelicals who understand their teachings about the "Great White Seat of Christ", the "Judgment Seat of Christ" and God's judgment of sin at the Cross, this could be helpful. Some Evangelicals are nervous about asking Christians in heaven to pray for us because they think the final judgment hasn't occurred yet and therefore not in heaven. The Evangelist, Calvin held that the final destiny is not decided until the last day of history. (Inst. III, 25) This is the view of most Evangelicals.

Here is what I read on an Evangelical website:

The judgment Seat of Christ is an evaluation of a Christian's production during his Christian life on earth. There is no judgment of sin at the judgment Seat. Believer's sins were judged at the Cross, and Christ was our atonement for sin.

Now this kind of contradicts the Calvinists noted above. So there is quite a bit of division among Evangelical denominations on this point.

It appears that Evangelicals have taken the Catholic concept of "Particular judgment" and moved it from the time of "death" to the moment that the person surrenders to Christ (born again). At the "born again" moment they join in God's judgment of sin on the cross. That's two judgments. One at "born again" experience and another at the end of the world. So Catholics and Evangelicals are not as far away from each other as it first appears. The only difference is that Evangelicals infer that the first judgment occurs when they are born again (they are joined to God's judgment of sin on the cross), and Catholics believe the first judgment occurs at death. Both Catholics and most Evangelicals believe we will be judged at the end of the world.

The Evangelical Model as we understand it 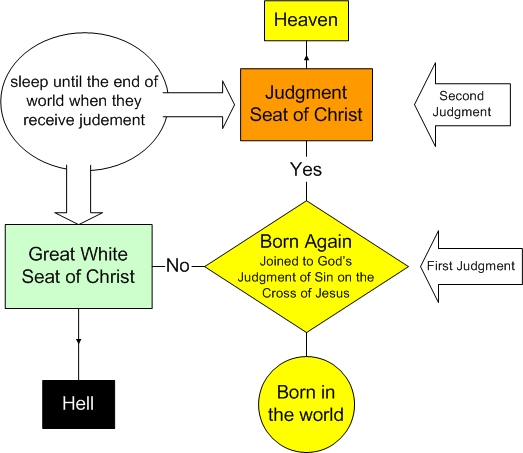 Where are the two judgments in the Bible?

Catholics believe that there will be a final "general" judgment at the end of history but that there is a "particular" judgment at the time of death: that immediately after death, the eternal destiny of each separated soul is decided by the just judgment of God. Then at the end of the ages there will be a "general judgment" when the deeds of all will be known by all and nothing will be hidden. (Mk 12:38-40, Lk 12:1-3, Jn 2:20-21, Rom 2:16, 1 Cor 4:5) At that time Catholics think we will be reunited with our bodies, although Paul makes it clear that we they will be spiritual bodies. (1 Cor 15:44)

Some Scriptures that Catholics use to support the doctrine of "Particular" judgment at the time of death are: the penitent thief was promised that his soul instantly on leaving the body would be in the state of the blessed: "This day thou shalt be with me in Paradise" (Luke 23:43).

St. Paul (2 Cor 5) longs to be absent from the body that he may be present to the Lord, evidently understanding death to be the entrance into his reward (cf. Philemon 1:21 sq.).

Then I saw thrones, and those seated on them were given authority to judge. I also saw the souls of those who had been beheaded for their testimony to Jesus and for the word of God. They had not worshiped the beast or its image and had not received its mark on their foreheads or their hands. They came to life and reigned with Christ a thousand years. 5 (The rest of the dead did not come to life until the thousand years were ended.) This is the first resurrection. 6 Blessed and holy are those who share in the first resurrection. Over these the second death has no power, but they will be priests of God and of Christ, and they will reign with him a thousand years.

12 And I saw the dead, great and small, standing before the throne, and books were opened. Also another book was opened, the book of life. And the dead were judged according to their works, as recorded in the books. 13 And the sea gave up the dead that were in it, Death and Hades gave up the dead that were in them, and all were judged according to what they had done.

There is a song that is a "Top 10" Christian hit by Evangelical singer Chris Rice. It says "I just want to be with you [God], I want this waiting to be over." Catholics say "Amen" to that.