Was James the first pope

There is no biblical evidence of a power struggle between St. James (the Bishop of Jerusalem) and St. Peter.

“Simon, Simon! Remember Satan has asked for you (Greek plural-“you all”), to sift you all like wheat. But I have prayed for you (Greek singular-“you alone”) that your faith may never fail. You in turn must strengthen your brothers” (Luke 22:31-32).

Peter oversaw the grafting in of the Samaritans, and then the Gentiles. This could have wrecked the faith, but under Peter's guidance the Church went along with it, because he was their leader. Jesus said "make disciples of all peoples" (Mat 28:19) and that could best be accomplished through the communications centre of the world, which was Rome.

James was the bishop of Jerusalem. From a clearly practical standpoint, it's hard to imagine how the Church could have succeeded with the Pope in Jerusalem. Jerusalem has been in a constant state of turmoil, and has been conquered many times. Jerusalem was under Islamic rule for many of centuries since the time of Christ. We can imagine the fate of the seat of Christ under Islamic Rule. It would have been a disaster. God knew what he was doing when he moved the seat of the Church away from that hotbed.

Most reformers understood Peter to be the rock. The reason they could say this and still claim that the current Pope is not the same rock as Peter is that they think Peter's authority died with him. Catholics think this is a mistake.

In Matt.18:16, true to his usual form of teaching, Jesus was invoking an old testament Scripture. In this case it was Isaiah 22:22. If we look at this passage, we see the precedent of succession to which Catholics believe Jesus was referring.

In the Old Testament, the office of Chancellor was a dynasty that had successors. This was evidenced by the reference to an office, a throne, a robe, authority, and the keys. This office also sounds a lot like a present day Pope. The key holder is called a father. This appears very much to be the language of succession. Even the reference to the "House of David" in Isaiah 22:24 points to the issue of succession. David had died 400 years earlier. Jesus is also in the lineage of David. Jesus was King and certainly had the authority to give Peter the chancellor's (Prime Minister's) keys that God had given to Eliakim.

When Jesus gives to Peter the keys of the kingdom, Peter is receiving the Prime Minister's office, which means dynastic authority from the Son of David, Jesus, the King of Israel, but also an office where there will be dynastic succession.(ibid)

Keys are a permanent kind of thing. Jesus didn't say "I'll take them back after you die". That would not make sense. Catholics think Jesus gave Peter the "office" just as Eliakim had been given the "office". Jesus gave Peter power to bind on earth. So Peter had power to name a successor, which Catholics think he did. He gave the keys to Linus, who gave them to Anacletus, who gave them to Clement.

While in Corinth, St. Clement, who was the Pope in 96 A.D., wrote appeals for the memory of the two martyrs, Peter & Paul (epistle to the Corinthians 5:3-7) He explicitly referred to the Apostles who appointed bishops and made provisions for their succession.

Irenaeus was familiar with those who had been close both to Peter and to Paul and who "had the preaching of the blessed Apostles ringing in their ears." He testifies that the truth which the Church received from the Apostles had come down to him, and consequently "one and the very same life-giving faith had been preserved in the Church and was handed down in its purity and integrity from the Apostles even to his own day" (Against Heresies 3,3). (Knights of Columbus pamphlet Mary Mother of God)

Catholics feel this commission is not without biblical precedent. In the Old Testament we see prophets passing on power to their successors by the laying on of hands and anointing. For example:

Joshua son of Nun was full of the spirit of wisdom, because Moses had laid his hands on him (Deut 31:1-8)

You [Elijah] shall anoint Elisha son of Shaphat of Abel-meholah as prophet in your place (1 Kg 19:16)

...Samuel took a horn of oil, and anointed him in the presence of his brothers and then spirit of the Lord came mightily upon David from that day forward. (1 Sam 16:13)

Over time, the successors to the Apostles were called bishops ("Bishop" is a translation of the Greek "episcopos" which literally means "one who oversees/supervises") and they had an office: "This saying is trustworthy, whoever aspires to the office of bishop desires a noble task" (1 Tim 3:1) (see also Phil 1:1)

I was recently in Rome and took the opportunity to visit the Catacombs. It was a very moving experience. The early Christians set up a separate room specifically for the Popes. This room contained the remains of 9 Popes from 235 A.D. to 283 A.D. The early Christians understood how important it was to have a leader. Each one was in succession of Peter. 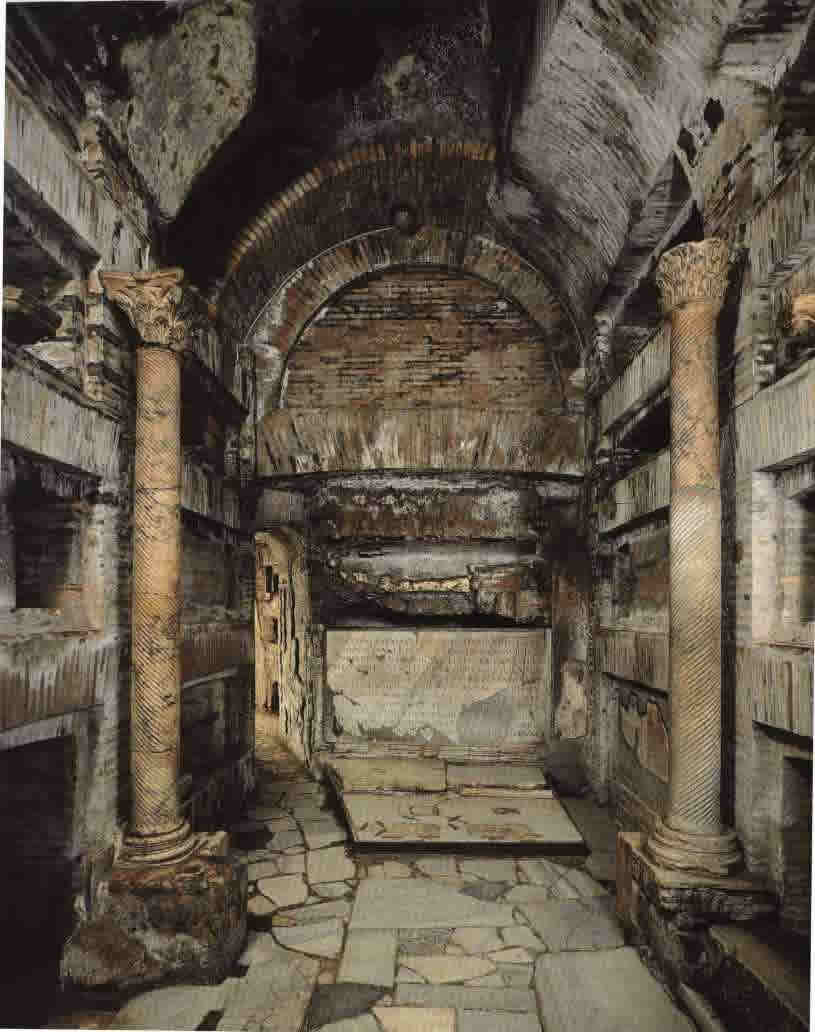 Buried here were the following Popes. In brackets are the years they served.

A complete list of all the Popes is here.

Catholics believe Peter was the first Pope and that there has been succession to this day. There have been 266 Popes. The keys have been handed down. The Catholic Church can trace historically through each era until the present day. A timeline of the early Church is here, There is a section explaining Priestly succession here.

See more in our article "If Peter had primacy, why did James make decisions?""