We got an email that said:

Joan of Arc is a great saint, but didn't the "Catholic Church" burn her at the stake? Does that not prove that the Church was against women?

To understand the situation of Joan of Arc, we need to draw some context. During the early 1400's there was civil war in France that erupted over two warring factions of the Royal family. This left the country vulnerable from attack by the British. The British just about gutted France.

From the age of 12, Joan had been getting visions from Saint Catherine of Siena and St. Micha 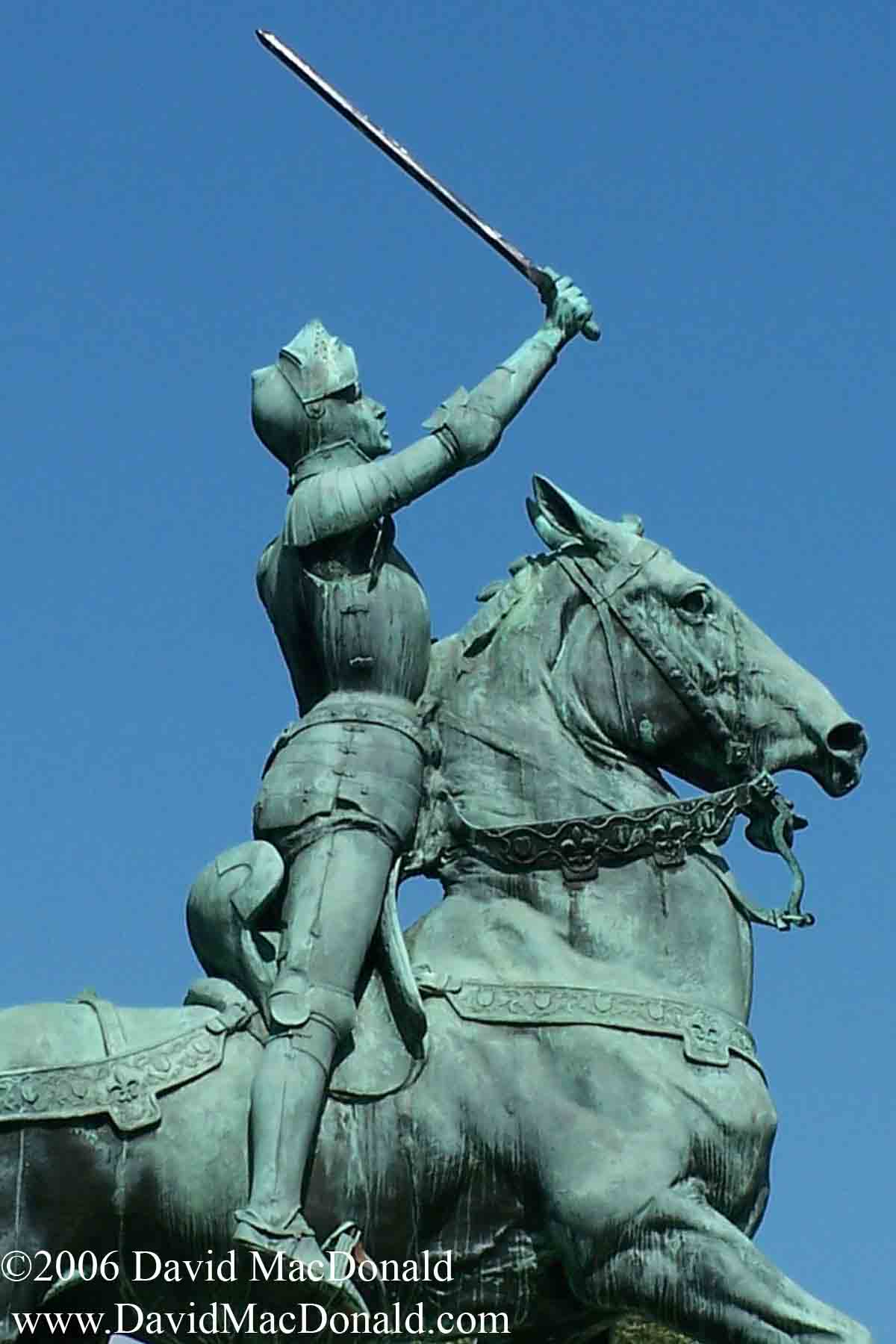 el (who several years earlier was declared patron saint of the French army). At first the visions and voices just told her to go to Church and to protect her virginity. But when things got desperate for France the voices told her to lead an army against the British because God wanted Duke Charles of France to be the ruler and king of that country.

After much effort she got to see Duke Charles of France and won his confidence by telling him about his secret prayers.

In France, the greatest theologians told Charles that he could grant her titular command of an army - an arrangement which was occasionally given to religious visionaries during the medieval period. One account written by a Venetian notes that her ability to hold her own against the learned theologians earned her a reputation as "another Saint Catherine come down to earth", and this reputation began to spread. ... (www.joan-of-arc.com)

The Duke Charles gave her a regiment and she lead a French battalion against the English and basically turned the whole war around. She succeeded in getting Charles crowned King of France.

Naturally this upset the other part of the French Royal family that were vying for the crown. They managed to betray her to the English who had invaded and occupied Rouen in France where she was captured. The English were very bitter about being beaten by the French. I must say that the English do not lose well, especially to a woman. Anyway it was the English court that tried Joan under the auspices of an Inquisition. But it was basically a farce. The English wanted to put to death this French heroine who had defeated them. They tried many ways to convict her. They tried to prove she was a witch but Joan was inspired under questioning and the charges were dropped. Eventually they convicted her of cross dressing by removing her cloths in prison, attempting to rape her and then when she put on the cloths to protect herself they convicted her as a relapsed heretic.

The death of Joan of Arc was a rigged bogus Inquisition set up by the English to kill the French heroine that defeated them. It was not about heresy, it was not about the Church putting its thumb on women. In fact the French Church empowered her to lead the French troops as a religious visionary against the English.

Joan continually appealed for her right to see the Pope, but the corrupt English court would not allow it because they knew the Pope would have set her free. This was not a Church crime, it was a crime of the English against the French, thinly disguised as a Catholic inquisition. But the court was anything but faithful to the Pope, and the Magisterium. It is no wonder that England broke off to make their own Church 150 years later. Joan of Arc is one of our greatest Saints and we are proud of her. This site tells the full story, including letters and the full trial:

Some of these men [court officials] later admitted that the English conducted the proceedings for the purposes of revenge rather than out of any genuine belief that she was a heretic..

It would not be until the English were finally driven from Rouen in November of 1449, near the end of the war, that the slow process of appealing the case would be initiated. This process resulted in a posthumous acquittal by an Inquisitor named Jean Bréhal, who ironically had been a member of an English-run institution during the war. Bréhal nevertheless ruled that she had been convicted illegally and without basis by a corrupt court operating in a spirit of, quote, "manifest malice against the Roman Catholic Church and indeed even of heresy". The Inquisitor and other theologians consulted for the appeal therefore denounced Cauchon and the other judges and described Joan as a martyr, thereby paving the way for her eventual beatification in 1909 and canonization as a saint in 1920, by which time even English writers and clergy no longer showed the opposition that their predecessors had. During World War I, in the midst of the canonization process and a period of French-English detente, Allied soldiers would pay tribute to the heroine by invoking her name on battlefields not far from her own.