Is the Church Rich?

There is a popular idea that the Church is rich. In our recent World Youth Day we clearly saw that the Catholic Church doesn't have the kind of deep pockets that many critics claim it has. All of us Catholics from across the country dug into our pockets to pay for it! But we paid it off and the youth were worth it. On the banner above is the Pope at the World Youth Day in Rome.

Vatican annual budget less is than Archiocese of Chicago

The Vatican itself has a yearly budget that is equivalent to the Archdiocese of Chicago, and frequently runs on a deficit. For instance, in 2001, revenues were $173.5 million US, expenditures were $176.6 million, including capital expenditures. (source http://www.infoplease.com/ipa/A0108136.html)

Today the papal states have been reduced to the Vatican State -- a tiny little city State, and it is a sovereign state with the guarantee of independence from secular powers by a Concordat signed with Italy.  But the Pope remains head of State as well as head of Church.

Vatican doesn't own an airplane, Oprah does

The Vatican doesn't even own an airplane, the papal team rents them, or they are chartered by the country they are visiting. We take good care of the Pope. He's over 80 years old! We feed him well, dress him well, give him a good doctor, give him a comfortable bed so he sleeps well and stays healthy, give him a bullet proof vehicle so crazy people don't kill him. He is working long hours, and has dedicated his life to the Church. It's a lot of work to elect a new Pope, and we don't want them always dying on us, unnecessarily. We must remember that the early Church did not want people to run out and try to get themselves killed for the faith. They said, "avoid becoming a martyr if you can, but don't compromise your faith." And that is the spirit with which we are taking care of our Pope.

What about the beautiful expensive churches 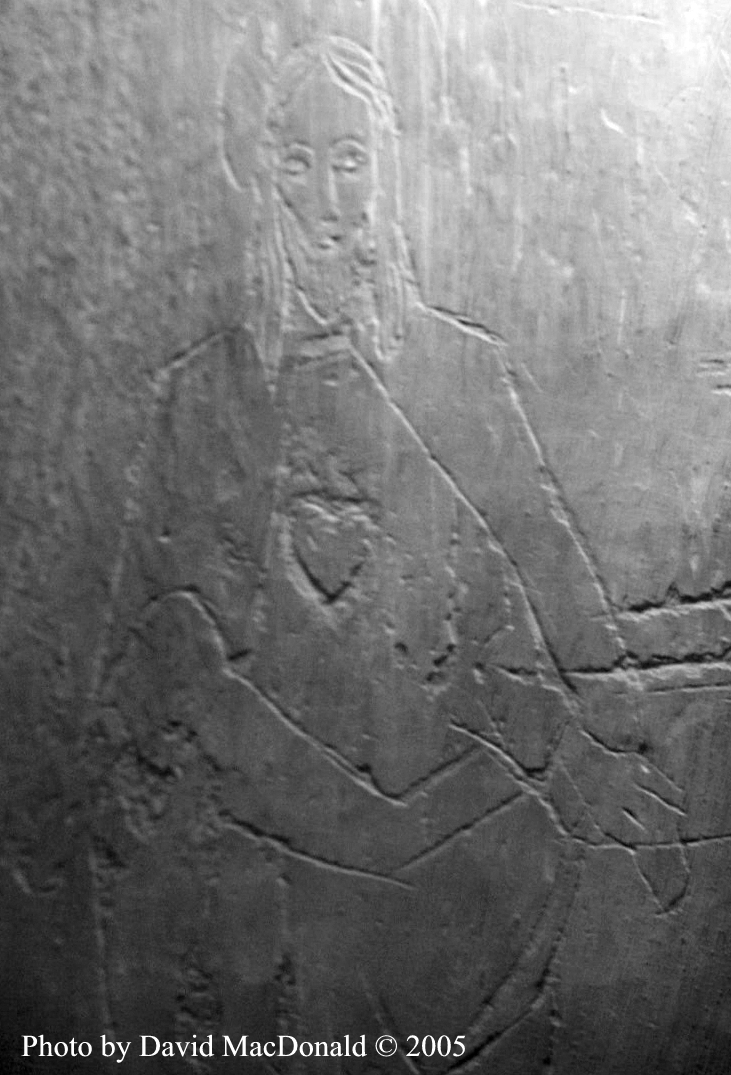 There were secret Masses held by priests in German concentration camps before Catholics were gassed to death for their beliefs. To the left is a picture that I took while at Auschwitz. It is a picture of Jesus etched into the prison wall by a Catholic before he died.

Even though Mass can be held anywhere, Catholics believe Jesus has a passion for the Holy Temple. Catholics believe the only reason the early Church met in peoples' homes and Catacombs was because they were under persecution.

When Jesus saw money changers in the Temple, He didn't say to his disciples, "hey guys, it's only a building, we can worship anywhere, let's go down the street to the community centre." No, He chased the money changers out. (Lk 19:45)

The big beautiful traditional Churches that receive the most complaints were not built with big bucks. They were built with the sweat of the brow of volunteers who worked 'till 11 PM every night after a full day of working their regular day jobs. They would do this for years until their community parish was built. For the big European Churches it would take many generations. The Cologne Cathedral took 700 years! We wish we had that kind of tireless faith and dedication. Perhaps our contribution is this website on top of our day jobs.

There is another kind of wealth called the "Church Treasury" that has nothing to do with money. "It is the infinite value, which can never be exhausted, which Christ's merits have before God." (Catechism section 1476) This "Treasury" also contains the deposit of faith from 2000 years of prayers of the faithful Christians who have been saved in the name of Jesus.

Churches and artwork are open to the public 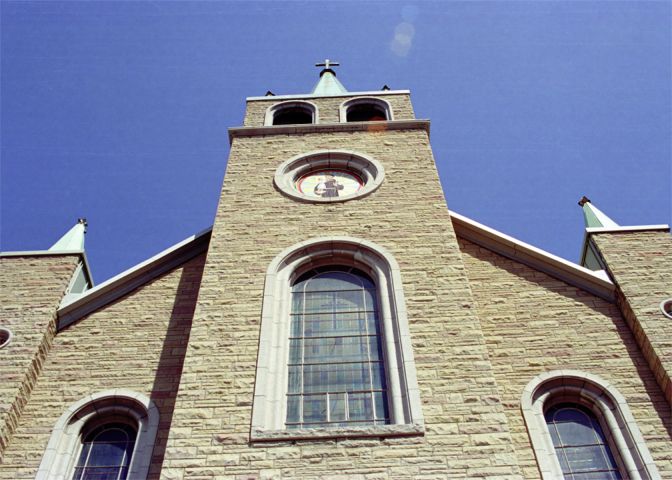 The majority of the Church's "wealth" is tied up in real estate and in art work. These assets are "public wealth." They are open for all to visit and see, much like a public museum. There is a Church in Montreal that has beautiful art (St. Joseph's Oratory)   I (Hugh) walked in off the street because it was open to the public. I wasn't a Catholic. I lay in front of the Cross and gave my life to the Lord Jesus. 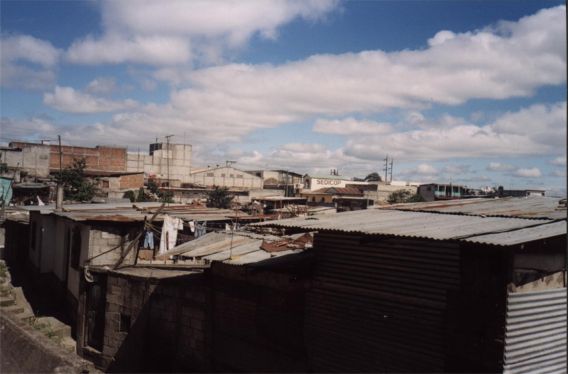 Above: the poverty in the Tin Village in Guatemala City
Below: a nearby Evangelical Church

In Guatemala city, a couple of kilometres from the "tin village," the Evangelical organization "Fraterinidad Christian de Guatemala" is building a new Church that holds 7,000 people in its amphitheater. It has a hundred meeting rooms. It has two stages, including the one below, a 1000 car parking lot, sleeping complex and dozens of other amenities. In fact, it competes with the Vatican in its size. 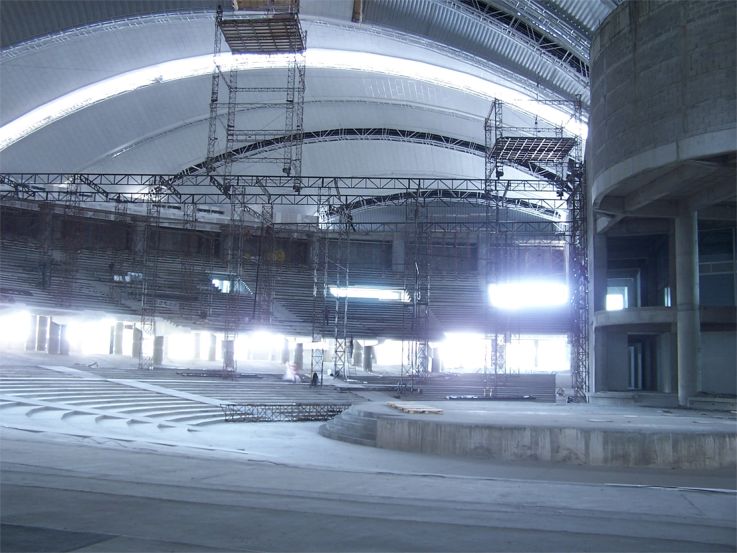 We do not have a problem with building a beautiful Church to glorify the Lord, even among impoverished people, if you plan to feed them. However, we think it is a mistake to say Catholics are the only ones who have beautiful Churches. The "Dream Center" in Los Angeles is another example of an Evangelical Church that rivals the Vatican.

Recently, Tyndale, the largest Evangelical Bible College in Canada bought the 56 acre grounds of the Sisters of St. Joseph. It includes what they describe as, "one of the most beautiful [Catholic Chapels] in Canada." These Evangelicals were happy to pay $40,000,000 for the property. Evangelicals are building big beautiful Churches as fast as they can get the money to build them. Catholics just had a 1700 year head start :-)

Catholics are not the only Christians who feel good art is valuable to the kingdom. Newsweek reports that the Evangelical Christian music industry sells over a billion dollars of artistic products every year (music, posters, movies, etc). This music enriches our faith when we turn on the radio. It evangelizes, and besides that, I really like the music!

Catholic art is much like Evangelical Christian Contemporary Music. It enriches our faith and evangelizes. Why would visual art that exalts the one true God be any different from audio art (music)?

Visual art is for the eyes
Music is art for the ears
Perfume & incense are art for the nose
All art forms can be used in service to God!

Why don't we sell the Churches, art and property and give it to the poor

The Church sells almost all gifts given to the pope and gives it to the poor. There is a special office for that.

Some people see the beautiful Catholic art and say, "sell it and give the money to the poor!" (Jn 12:5)

Judas said "we could get 300 denari for that perfume and give it to the poor" (Jn 12:5) but Jesus corrected him, "The poor we will always have with us."(Jn 12:3-8) Jesus' words sound cold and cruel toward the poor. But He saw that this valuable perfume (art for the nose) was being used to build up the kingdom of God. He could also see into Judas' heart.

How do we reconcile Jesus' words, "the poor we will always have with us" with his words to the rich man, "go and sell everything you own and give it to the poor." (Lk 18:22) On the surface they appear in conflict . The difference is that the rich man's valuables did not build up the kingdom of God while the perfume (art for the nose) did. It would be used at Jesus' burial.

The Church could sell off all its art. These beautiful contributions to our faith and culture could be put in the back rooms of private collectors' studios. This would be comparable to Evangelicals closing down their recording studios, selling the recording equipment and stop making great Christian Music. We could redirect all this money to the poor. If the Church got fair market value for all its art and property there would be no more than a couple of dollars for each poor person in the world. Then it would be spent and we would have no art to enrich our faith and evangelize new Christians. Not only that but there would be no Church property and no Churches. We don't think this would be in service to God.

Art and music have a place.

Here's what the Vatican Museum says:

Very rightly the fine arts, by their very nature, are oriented toward the infinite beauty of God which they attempt in some way to portray by the work of human hands; they achieve their purpose of redounding to God's praise and glory in proportion as they are directed the more exclusively to the single aim of turning men's minds devoutly toward God. SACROSANCTUM CONCILIUM, 122

If we replace the word "art" with "music" in the above statement, we're sure the Evangelical music industry would say "ditto."

Why was the Pope the head of his own country?